Now, in the tenth year of the crisis, the severity of needs remains overwhelming and demands global support.

Syria is the worst humanitarian and refugee crisis of our time. 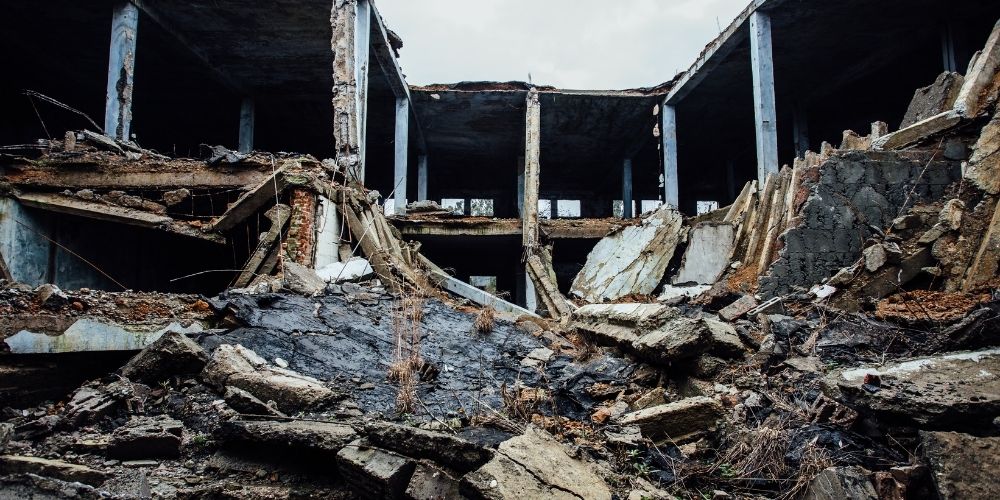 The number of Syrian refugees has been steadily increasing since the Syrian crisis began in 2011. According to the latest UNHCR and UNICEF reports on Syria, over half of the more than 5.6 million registered refugees fleeing Syria are women and children under 12 years of age. Only 10-20 percent of these people live in camps. The majority are urban refugees, who live in temporary housing in Lebanon, Jordan, Turkey, Iraq, and Egypt.

It is important to note that the 5.6 million number reflects only the officially registered Syrian refugees and excludes those who have declined to register, have not been able to gain refugee status, or are Internally Displaced Persons (IDPs) within the country. 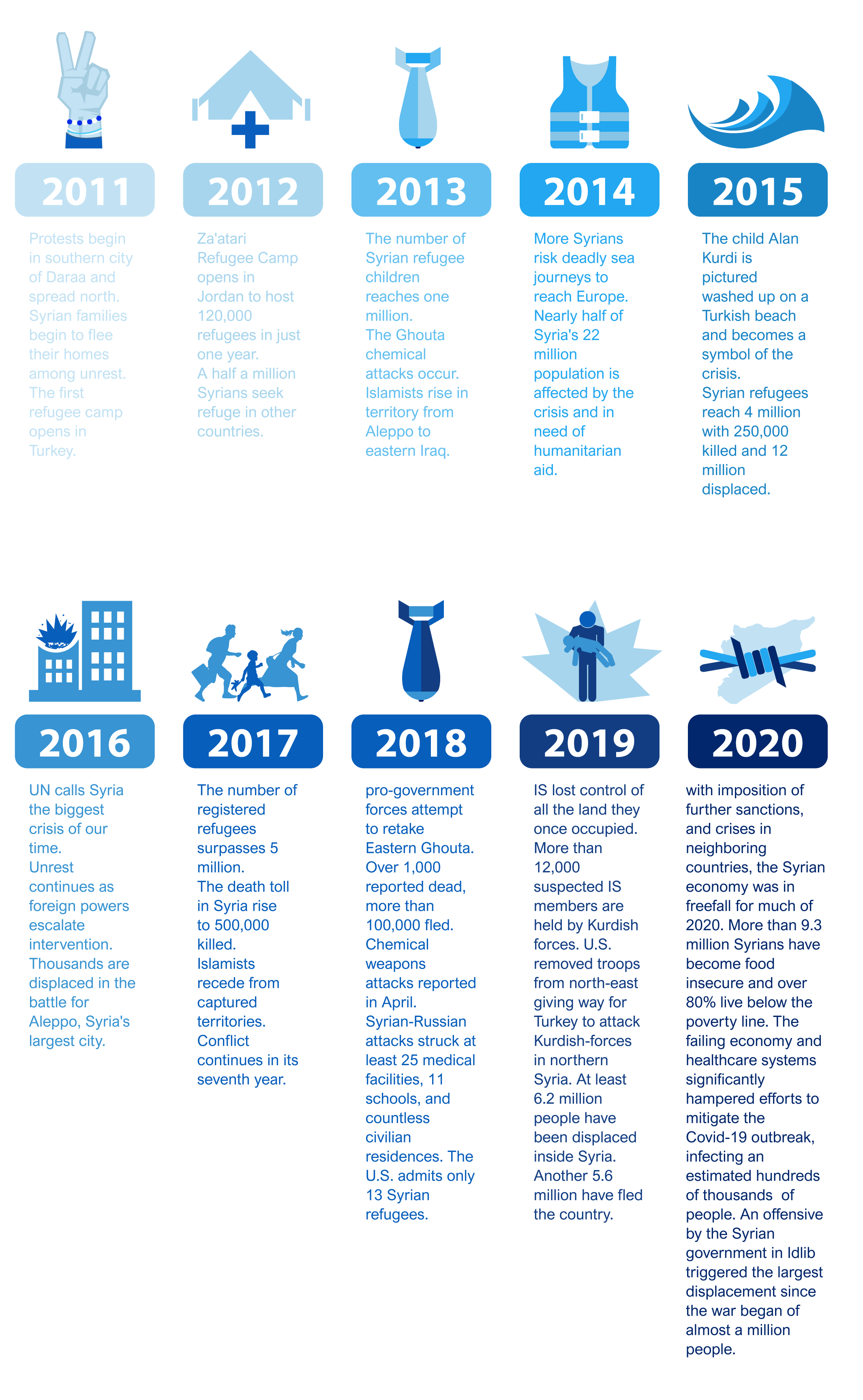 After more than a decade of war, the UN Commission of Inquiry on Syria reports that the country is not safe for refugees to return. There has been an uptick in violence in the northwest, northeast and south of the country, where sieges against civilian populations by pro-Government forces have returned on a regular basis. To date, 13.5 million people, more than half of Syria’s population of 23 million have been displaced by war.
The pandemic and worsening economic conditions have taken a disproportionate toll on women and girls across the region.

Practices such as child marriage have spiked, and access to school and health care are no longer assured. Additionally, close to half a million pregnant women are in need of reproductive health care.

The UN Population Fund reports that young people at their facilities demonstrate remarkable resilience, with many rising above their challenges to become artists, activists, innovators and provide influential voices in their communities.
“Like all girls in Syria, I live a difficult childhood,” said Bana, 12, in northwest Syria. But she, like so many young Syrians, dares to dream of a better future: “I like to learn to make my future bright,” she said. “I hope that this war will end soon so I can return safely with my family to our home... I am sure this is the dream of every girl here.” 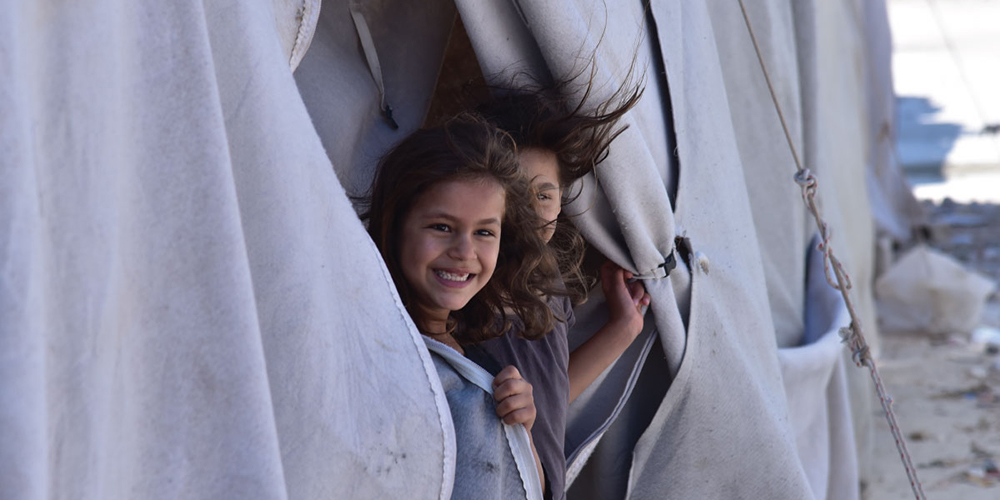 Who is a refugee?

Globally there are over 65 million displaced people who are fleeing their homes because of war, persecution, or violence. The legal status of displaced people depends heavily on which category they fall under: refugee, internally displaced person, or asylum seeker. The United Nations High Commissioner for Refugees' (UNHCR) definitions for these terms are listed below.

Refugees have been forced to flee their country because of persecution, war, or violence. A refugee has a well-founded fear of persecution for reasons of race, religion, nationality, political opinion, or membership in a particular social group. The average time away from their home country for refugees is 17 years.

Internally displaced persons (IDPs) have been forced to flee their home for the same reason as a refugee. But, they remain in their own country and have not crossed an international border. Unlike refugees, IDPs are not protected by international law or eligible to receive many types of aid.

When people flee their country and seek sanctuary in another country, they apply for asylum — the right to be recognized as a refugee and receive legal protection and material assistance. It is up to the receiving country's refugee processing bureaus to assess if a fear of persecution or other imminent danger is "well-founded." If that bureau finds that an asylum seeker's fear of persecution is not "well-founded," the asylum seeker will be deported back to their country of citizenship.

The United States has resettled slightly over 21,000 Syrian refugees since March 2011. This number is low compared to European countries with more 1 million Syrian refugees arriving, 55 times more than the United States. It is even lower when compared to low to moderate income countries neighboring Syria — like Turkey, Lebanon, Jordan, and Iraq — which host more than 5 million people.

The top three resettlement states in the U.S. for Syrian refugees are Michigan, California, and Texas. In Michigan, metropolitan Detroit is home to one of the largest Arab populations outside the Middle East and has a large Syrian-American community. In California, Syrian refugees have mainly resettled in San Diego and Sacramento. In Texas, resettlement is distributed across the major cities Houston, Austin, and Fort Worth. 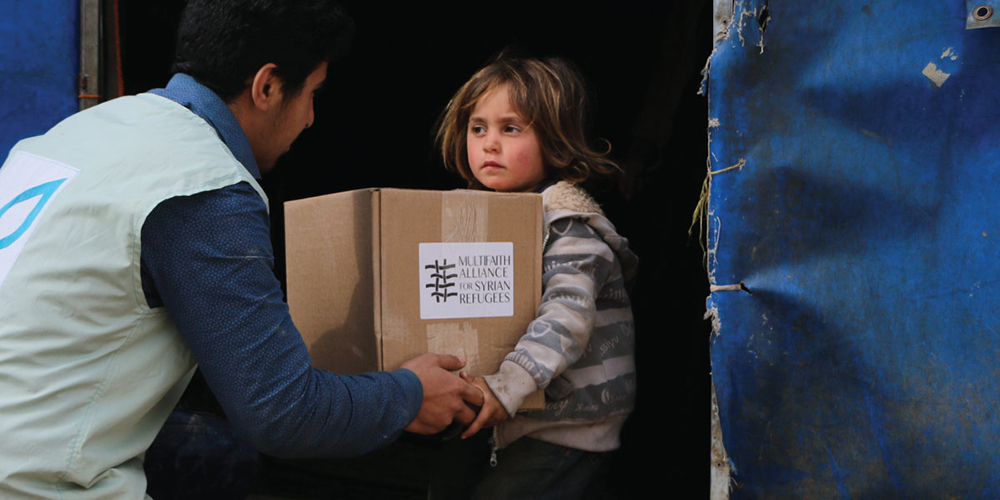 As the Syrian crisis continues into its ninth year, more than 13.5 million people in Syria are in need of humanitarian assistance.

To respond to the crisis, MFA and its partners have delivered more than $150 million of relief supplies into hard-to-reach areas inside Syria and refugee camps along the border.

MFA works closely with its trusted NGO partners on the ground in Syria to identify the precise relief needed. Then, MFA and its network of partner organizations determine how to best fill the need. MFA projects range from supporting hospitals with urgently-needed medical supplies to providing tents and warm clothing for the cold winter months.